Should We Honor Confederate Ancestors on Memorial Day?

‘Flags-In’ at Arlington National Cemetery for Memorial Day 2008 by The U.S. Army at Flikr

Many of my 4th and 5th great uncles died while serving in the Confederacy. This is difficult because I vehemently oppose the Confederacy’s ideals and what they were fighting for. I condemn their way of life and how they built their economy on the backs of enslaved people. I abhor their plan to rebel against my beloved country to continue their practice of treating people as property and ripping their families apart for financial gain. I am glad the Confederacy lost and I would have fought for the Union if I could go back in time.

So, I found myself asking this question, “should I honor Confederate soldiers on Memorial Day? And how can I possibly do that?” I wrote about my solution to honor them by viewing their lives objectively and learning about their experience at The Genealogy Reporter.

On Facebook the article received some backlash. One commenter felt that because Confederates were traitors to the U.S.A., they should not be honored on Memorial Day. Any other day, it’s ok to talk about their experiences, but not Memorial Day. I understand that point of view.

I researched the question again and came to a different conclusion. Here’s why.

The origins of Memorial Day (formerly Decoration Day) are controversial. Over two dozen towns claim to be the source of our modern Memorial Day observance.

Maj. Gen. John A. Logan, head of  the Grand Army of the Republic (GAR), a Union veterans association, declared on May 5, 1868 that Decoration Day should be observed on May 30 each year. It wasn’t until 1971 that Memorial Day was declared a national holiday.[i]

Historians ask the question – what influenced Logan to make this declaration? In The Genesis of the Memorial Day Holiday, historians Dr. Richard Gardiner and Daniel Bellware write that Logan was influenced by an annual memorial observance in Southern states begun in 1866 by the Ladies Memorial Association.[ii]

An article in the New York Times tells about four women of Columbus, Mississippi, a hospital town and burial site for both Union and confederate dead, who decorated the graves of these soldiers on April 25, 1866.

“As the story goes, one of the women spontaneously suggested that they decorate the graves of the Union as well as the Confederate dead, as each grave contained someone’s father, brother or son. A lawyer in Ithaca, N.Y., named Francis Miles Finch read about this reconciliatory gesture and wrote a poem about the ceremony in Columbus, “The Blue and the Gray,” which The Atlantic Monthly published in 1867.”[iii]

A blog post at The Atlantic Magazine shows an image of the poem in the bound volume of The Atlantic Monthly from 1867.[iv] The final stanza reads,

“No more shall the war cry sever,

Or the winding rivers be red;

They banish our anger forever

When they laurel the graves of our dead!

Under the sod and the dew,

Love and tears for the Blue,

Tears and love for the Gray.”[v]

According to the U.S. Department of Veterans Affairs, the first observance of Decoration Day in 1868 after John Logan’s declaration included “strewing flowers on both Union and Confederate graves, reciting prayers and singing hymns” at Arlington National Cemetery. (More about the Confederate dead buried at Arlington in the next section).

James A. Garfield, at the time an Ohio congressman and major general of the Civil War who became the 20th president in 1881, gave a speech that day, honoring the valor of the Union soldiers.

A small Confederate flag is allowed to be placed at Confederate graves, according to National Park Service regulations, on Memorial Day and Confederate Memorial Days (as celebrated in some Southern States) along with the U.S. flag.

I found that Confederate dead at Arlington are indeed given the respect of the placement of an American flag. They are placed on every grave for Memorial Day, at more than 228,000 headstones and 7,000 niche rows.[vii] This tradition is called “Flags In.”

One of my Confederate relatives, Charles Baldwin Royston, is buried at Arlington National Cemetery, in the Confederate section. I was quite surprised to learn of the existence of this section. It consists of a memorial, unveiled in 1914, and graves of over 250 Confederate dead arranged in concentric circles around it.

Originally, Confederate dead who were buried there were not afforded the standard granite or marble headstone, but were “similar to those of civilian employees and African American “contrabands” (runaway slaves).”[viii] Families of Confederate dead were not allowed to decorate the graves of their deceased relatives who were buried at Arlington and Union veterans stood watch over confederate graves at Arlington in 1869 to ensure that they were not honored.[ix]

This policy changed in 1898 when President of the United States William McKinley said, in an attempt to rally support from the Southerners for the Spanish-American War,

“Every soldier’s grave made during the unfortunate civil war is a tribute to the American valor. And while when those graves were made, we differed widely about the future of the Government, those differences were long ago settled by- the arbitrament of arms— and the time has now come in the evolution of sentiment and feeling under the providence of God, when, in the spirit of fraternity, we should share with you in the care of the graves of the Confederate soldiery.” (Quoted in the Sacramento Daily Union, Volume 96, Number 116, 15 December 1898)

Although they were traitors during the Civil War, many veterans of the Confederacy fought for the United States before the Civil War and went on to fight for the United States in future conflicts. Their lives were not defined by their service in the Confederacy, but they were complex individuals who were influenced by their time, location, and family. They made their own unique choices. We are not their judges, yet we can learn from them as we learn about their lives.

As mentioned before, some Southern States choose to honor their Confederate dead on separate Confederate Memorial Days. They take place on different dates in April, May and June.

Members of the original staff of the 14th Alabama Infantry regiment. Used with permission, Alabama Department of Archives and History

“Every story matters” is the motto of StoryCorps. They seek to capture the stories of all kinds of Americans through oral history interviews between family members which are saved for the future at the Library of Congress. Their mission is, “to preserve and share humanity’s stories in order to build connections between people and create a more just and compassionate world.”

With this motto in mind, I choose to honor my Confederate soldiers by learning about their story and feeling compassion for them, yet going forward with my knowledge of their choices to create a more just world. I don’t believe what they believed, but their lives mattered, and I choose to remember them on Memorial Day, the national holiday of remembrance for my country, which I love.

A spirit of reconciliation and somber gratitude for the sacrifices made on each side permeated the original celebration of Memorial Day. I want to carry that forward in my own observance. By remembering my Confederate relatives along with my Union relatives on Memorial Day, I show my belief that every story matters. Their story may be different than my own beliefs and my own choices, but that doesn’t mean I should forget them. I hold them in remembrance not only because they are part of my family tree, but because I want to honor the whole human experience by seeking to understand it. Every story matters.

What do you think? Should Confederates be considered American soldiers? Should their graves be honored with American flags on Memorial Day? Should we honor them at all on Memorial Day? Please share your thoughts in the comments section. 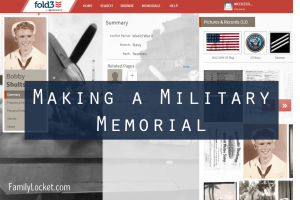 How much do you know about the military service[...]

For family history storytime this week we read The Wall by[...] 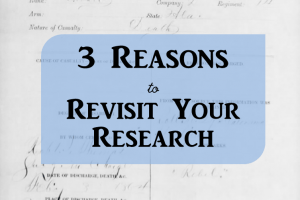 3 Reasons to Revisit Your Research: Discovering the Story of C.B. Royston, Confederate Soldier

How long has it been since you looked at some[...]

Leave a Reply to Susan Clark