Creating source citations from online materials can be confusing and vary from website to website. In Part 1 of this series, we looked at a source document hosted on Ancestry. I showed the process I use to create a citation that includes the basic citation elements of who, what, when, where, and wherein. This article will focus on citing sources found on FamilySearch – those indexed and not indexed.

Citation for a Record Indexed on FamilySearch

The marriage record for my great, great-grandparents has been digitized and indexed on FamilySearch. I’ve attached it to the source list for William Henderson Shults and can easily view the image because it is linked to his source page – shown in the screenshot below.

Details for the marriage source for W. H. Shults and Eliza A. Isenhower

FamilySearch creates good source citations for an indexed record and the citation for this marriage record is quite detailed.

Does this include the basic citation elements? Is there anything that could be edited for my use in a research log, genealogy software program, or family history? This is a citation for the indexed Texas marriage collection, so it reflects mainly the digital information. I adjusted a few things to reflect additional information for the physical layer. I also deleted the information at the end about citing the Texas State Library, Archives, Division, and various Texas county clerks. This part of the citation refers to the entire collection of Texas marriage records, and in this case, I used only a reference to Bell County as the creator of the source.

In this citation I led with the digital layer (in bold) because the record was part of an indexed digital collection and could be relocated through that collection. Then I added information for the physical layer, then ended with the Family History Microfilm number (in bold). A semi-colon separates each layer.

Elements in the citation

Who created the source?

What is the source?

When is the source?

Where is the source?

Digital Layer – https://www.familysearch.org/ark:/61903/3:1:33SQ-GP3K-JWB?  [this is the URL for the actual image instead of the indexed record on FamilySearch]

Wherein is the source?

With these simple changes, I’ve added additional information that helps me understand more about the original source of the record – the marriage book of Bell County, Texas.

Next, let’s look at another example, this time for an unindexed record on FamilySearch.

Citation for a Record Image Not Indexed on FamilySearch

If you have located a record on FamilySearch by browsing a digitized microfilm or a newly digitized record collection, there will be no source citation created for you. Instead you’ll need to compile your own using the source data provided on the website and the document.

For example, a new source appeared for my great-grandmother, Alice Frazier, on her source page. Alice was born in Texas in 1886 and knowing Texas did not record births before the 1900s I had not thought to look for a birth certificate. What was this record?

The indexed record came from a set of images but had not been connected to the original image. The information matched what I knew about Alice – parents, birthplaces, and dates. What it didn’t explain was when this birth certificate was created – at the time of birth or later in Alice’s life as a delayed birth certificate.

As good genealogists, we always want to look at the original record as the indexed version will not include all the details we need for thorough analysis. The indexed record did have a citation attached which detailed the collection, website, date it was created and the specific item detail. A link to the film gave me the opportunity to browse the film and find the original.

When given the option to browse the film, always look at the beginning of the film to understand the record collection. Doing this I discovered this was a digitized microfilm titled “Delayed Birth Certificates,” located at Montague County, Texas. The certificates were originally filmed on 8 January 1986 and had been at the Family History Library all along as film # 1,435,324. When FamilySearch digitized the microfilm it was assigned a new number DGS 007611604 (shown in the top left corner.)

Screenshot of the beginning of digitized Family History Library microfilm 435324

Viewing the big picture of the images let me see immediately that this was arranged alphabetically. Changing the image number to jump ahead in the film, I quickly located the “F” section and found the image of the original delayed birth certificate for Alice Frazier. Viewing the original I learned that in 1949 Alice went through the process of recording her birth at the Montague County courthouse, providing two witnesses who signed affidavits attesting to her date of birth in Montague County, Texas, and her parent’s names. One of the witnesses was her brother, Ed T. Frazier, of Burneyville, Oklahoma, and the other was  C.I. Taylor who attested that he was not related by blood or marriage.

FamilySearch gave me the ability to attach the birth certificate to Alice Frazier’s record, and created a direct link to the image and a source title that I could edit. I wanted to create a complete source citation for my own records so I used information provided by FamilySearch in the catalog record as well as the document to create the following layered citation.

Elements in the Citation

Who created the source?

What is the source?

Digital Layer – same as the physical layer, not repeated

When is the source?

Where is the source?

Wherein is the source?

I follow this basic format when working with digitized microfilm on FamilySearch. Once you get the hang of it, creating a source citation with the various layers is easy.

Best of luck in all your genealogical endeavors! 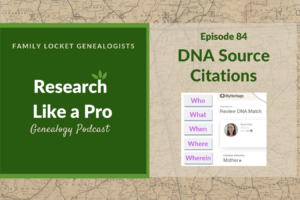 Today's episode of Research Like a Pro is about[...] 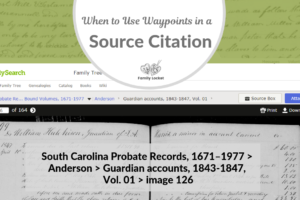 When to Use Waypoints in a Source Citation

I have been studying citations for my Salt Lake Institute[...] 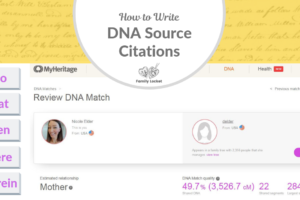 Are you ever frustrated while writing citations?  Many people are! [...]

Leave a Reply to Diana Elder