In celebration of Utah’s Pioneer Day on July 24, I’ve been studying my Mormon pioneer ancestors and sharing their stories on Instagram tagged with #MyPioneerAncestor. It has been a fascinating study. For some, their travels were extremely difficult and required many sacrifices. For others, it was a joyous journey and they became so skilled that they traveled the route again and again to help other emigrants.

I began by checking out the FamilySearch Pioneer campaign,  FamilySearch.org/Pioneers. It scans your family tree against the Mormon Pioneer Overland Travel database (created by the Church History Library) and creates a list of your ancestors who came to Utah from 1847-1868. (In May 1869, the First Transcontinental Railroad was completed with the driving of the golden spike at Promontory Summit, Utah Territory, ending the era of Mormon pioneer overland travel.) The FamilySearch Pioneers campaign told me that I have 23 pioneer ancestors.

I made a spreadsheet and found out that I actually have 51 ancestors who attempted to travel to Utah during that time period. Several died before reaching the Mormon pioneer trail, which began at Council Bluffs, Iowa and ended at Salt Lake City, Utah. Some of my ancestors died while preparing for the journey in Florence (now Omaha), Nebraska and St. Louis, Missouri.

The Mormon Pioneer Overland Travel Database is well researched and easy to navigate. It has links to many primary sources that tell what the journey was like for each company. For example, I know that my ancestors who came to Utah with the Brigham Young 1848 company left Winter Quarters, Nebraska on 5 June 1848 and arrived in Salt Lake Valley on 20 September 1848. There were about 1220 individuals in the company.

These facts are helpful, but the most wonderful part of the database is the primary source documents that are transcribed for us to read. My ancestors in the Brigham Young Company of 1848 didn’t keep journals or write firsthand accounts of their experiences (that I know of), but I can still read about what the journey was like! From the Autobiography of Benjamin Ashby, I read this interesting account of their experience with the oxen dying:

When we got to the last crossing of the Sweetwater we stoped some 8 or 10 days waiting for teams from the valley which were to meet us there[.] the oxon commenced to die and it was said it was the alkali[.] the people some of them fed a considerable tobacco to their oxon and according to my observation it poisoned the cattle worse than the alkali and caused more death[.] we had one ox taken sick and I gave him about two pound of fat pork and he recovered.

The other source of pioneer stories that I have found is the memories section of FamilySearch. The stories are attached to their FamilySearch profiles and many times include anecdotes about their Mormon trail experiences that were passed down to children and grandchildren. This one I found particularly wonderful:

Amanda and her family remained in Winter Quarters in 1847 where Amanda became very ill with “black canker” (an archaic term for diphtheria). Her throat and mouth were so sore she could not eat, and large canker sores as big as 50 cent pieces covered her entire body. Family legend says no one expected she would live until an old woman came to the wagon and said to Amanda’s mother Betsey, “Sister Bradley, I think I can cure your daughter.” She gave Betsey a bottle of reddish-brown medicine that looked something like catsup, only it was sweet and had a pleasant flavor. Amanda was administered to by the Elders and took this medicine, a teaspoon full 3 times a day and returned to health. The old lady told Betsey and Amanda how to make this medicine by “burning coppurs and alum on a fire shovel and adding healing goldenseal and other ingredients to it.”

A few days later, I read a story about Phoebe, another ancestor who was at Winter Quarters in 1847 (and was 60 years old at the time):

Phoebe had a reputation for discovering sick or discouraged people and nursing them back to good health. Her talent made her a great asset to the Church in its early years. Her early frontier training gave her a knowledge of herbs and their uses, so she was called upon day and night to help sick people as there were so many in the camps.

Do you have Mormon pioneer ancestors? I hope you’ll share their stories with us on Instagram tagged with #mypioneerancestor. I’ll be sharing one ancestor a day until July 24. Happy Pioneer Day! 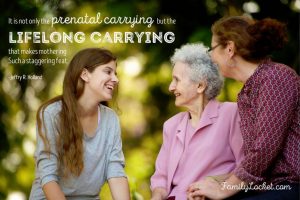 Elder Holland's beautiful talk about mothers today made me think[...] 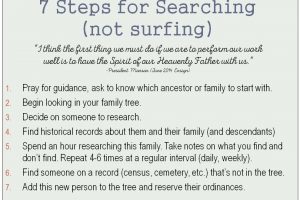 Searching vs. Surfing for A Name

Our ward is working on a temple challenge to find[...] 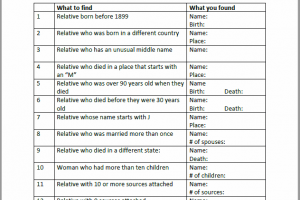 Looking for a fun activity for children that helps them[...]

Leave a Reply to Grant Davis